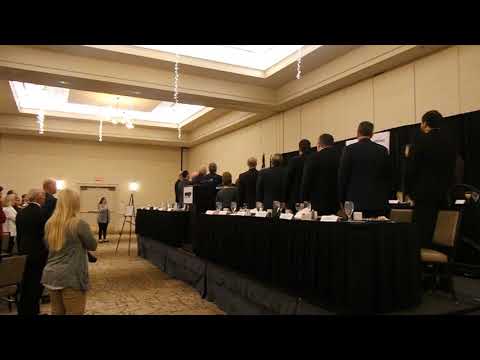 KINGSPORT — Just about everything will be brand new at the Tennessee Capitol this year.

A new governor. More than 30 new lawmakers — the most since 1867. And new legislative committee chairs, including two from Northeast Tennessee.

That was the main message from a 2019 Regional Legislative Breakfast held Friday morning at the MeadowView Marriott and hosted by Tri-Cities chambers of commerce and the Tennessee Chamber of Commerce and Industry.

Here’s what lawmakers and others had to say:

“(Kingsport Chamber President and CEO) Miles (Burdine) sent me a text a couple of days ago (that said), ‘Will you bring your dog?’ Hank Hayes noticed this morning that (Lundberg’s dog) Nash was visiting with everybody. He said, ‘Is he running for office?’ I said, ‘Thank God he’s not because he wins.’ ”

“This upcoming session is probably going to be different than anything we’ve experienced in awhile, simply because we’re all kind of new. A new governor. A new (House) speaker (Glen Casada, R-Thompson’s Station). New representatives. New committee chairmen. I was very blessed to be appointed chairman of the (House) Local Government Committee and I’m very excited about that.”

“Yesterday I received an appointment to be the chair of the (House) Commerce Committee. That is a tremendous responsibility. That committee oversees exactly what you think it oversees in terms of subject matter.”

“I think this year is going to be a trajectory we’re used to in some ways. The SRO (School Resource Officer) is going to be a big topic. I think we will also deal with where we have passed legislation on the opioid issue and where it’s going to go from here. I also have a desire for sentencing reform.”

“I was for regionalism before regionalism was cool because where we are in Greene County, there’s always an opportunity to go west. But my airport is up here. My hospitals are up here.”

Hill has just been appointed deputy speaker. “All of us were already hitting the ground running for our region. It is so important we keep that momentum going. I do believe there will be some real issues come before the legislature this year.”

“I’ll be serving on budget sub, finance and state government so I’m very excited to get started. We’re all waiting to see what (Gov.-elect Bill Lee’s) agenda is going to look like. My No. 1 agenda will always be to protect the interests of Hawkins and Hancock counties.”

“The governor has priorities, like technical education, one being corrections reform and one being investment, encouragement and intentionality in rural communities. The Department of Labor and Workforce Development sits at the center of all those things.”

“The state chamber wants Tennessee to be the best state in the nation to grow, to start a business and to raise a family. The workforce participation rate, in Tennessee we have one of the lowest in the Southeast. Why is that? The opioid epidemic is one reason.”