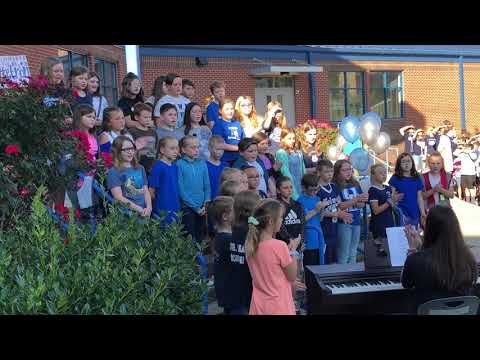 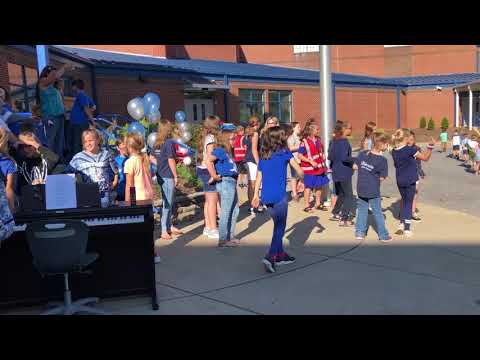 KINGSPORT — What local public school turned 65 years old this month, has a principal whose great-great-uncle was its namesake and was recently named a 2019 Tennessee Reward School?

If your answer is Ketron Elementary in Bloomingdale, you are correct. Principal Sherri DeVault and Vice Principal Cathy Anderson at a Tuesday morning birthday celebration premiered a 1954 plaque to be displayed near the school entrance.

Sixty-five years ago this month, Ketron High School opened its doors. The region was in a post-World War II population boom. Lynn View High School in Lynn Garden had opened 1948, six years before Ketron. When Sullivan North High opened in the fall of 1980, students from Ketron and Lynn View began attending North High, and Ketron became a middle school and later an intermediate school.

Then, in 2011, the building closed for a major renovation and became Ketron Elementary, reopening in 2012 after the $15 million overhaul funded by federal stimulus dollars. And if plans of Sullivan County Schools work out, Ketron will become the only county school in the old North zone when the new West Ridge High School opens in the fall of 2021 and Kingsport takes the North Middle/High building it bought to serve as the city’s new Sevier Middle School.

WHAT IS REWARD SCHOOL STATUS?

Anderson said a Reward School banner also will be displayed when it becomes available. The designation means that the school did well in both value-added and raw achievement scores, and this marks the first time the school has received the distinction. The designation means the scores were among the top districts in Tennessee overall and among all students, including subgroups such as the economically disadvantaged and minorities.

However, Anderson said during the ceremony that DeVault’s first response to an email notifying the school of the designation was a little less reserved and could be heard throughout the building on a July afternoon after most staff had left for the day.

“From out of nowhere, I hear a blood-curdling scream,” Anderson recalled, saying she rushed to DeVault to find her staring at her computer screen and crying.

WHAT ARE HISTORY CONNECTIONS?

Although DeVault never attended Ketron as a student, she remembers playing high school basketball in the gym, her father was a student there when it opened in 1954 and her great-great-uncle was Joesph Ketron, for whom the school was named. This is her fourth year as principal.

Karlee Clendenin, a fifth-grader, was among the Leader in Me students who gave visitors tours of the school. She and speech therapist Kristi Richardson gave a tour including the original Ketron Wildcats gym.

DeVault said the student population, as of Tuesday, was about 650 in pre-K through fifth grade.

Clendenin said both of her parents attended Ketron.

She said the Leader in Me Program helps not only students but teachers and staff have a common voice and vision. Even the stairway at the front of the school lists in the risers below the treads attributes the program emphasizes. Richardson said students in the program help during lunch to greet incoming students and in the office.